Many years ago, when I was training seriously for the Long Jump, I used to travel into London each Sunday for training sessions. During the winter these trips featured a Monthly Test designed to monitor our progress.

I was part of a large “jumps” group used to congregate from a number of different clubs. There were exponents of Long Jump, Triple Jump and High Jump; both Male and Female; representing a range Age Groups (of which I always felt I was at the bottom end).

Most weeks we met at the glamorous setting of Wormwood Scrubs (at what is now known as the Linford Christie Sports Centre) but on special occasions, we met at Crystal Palace, the centre of UK Athletics at the time. 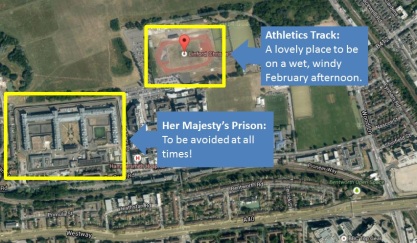 Wormwood Scrubs… a great day out!

The monthly tests focused on strength and endurance. Each set of tests culminated with the dreaded 300 metre run: To be a good jumper you need to be able to run quickly and in a controlled fashion for about 30 metres. 300 metres was therefore way over distance, and a real test of stamina. It was quite different from a straight sprint both physically and mentally. If done properly, it hurt… a lot!

My strategy for the 300m tended to be to go out fast (down the back straight), to cruise around the bend, and then to use what I had left in the home straight. It was conservative, but guaranteed that I’d have strength to finish in one piece.

On one particularly memorable Sunday we had met at Crystal Palace for a technique session with a specialist Jumps Coach. After the technique session we prepared for a 300m test to round the afternoon off. I was in a small group of athletes from my home club which included a couple of junior internationals and my coach. We were highly competitive, but we all knew our place in the pecking order. I was comfortable being at the bottom end, the youngest and weakest.

The pain and exhaustion of a typical 300 metre race!

As we made our way to the starting line, my Coach had a quiet word in my ear:

Coach: “Lead them out fast and then kick into the bend.”

Coach: “See what happens. Kick into the bend.”

So, that’s what I did. I led the group out, running hard down the back straight to hold my position, to stay ahead. As I hit the 200 metre mark I kicked again, accelerating as I entered the bend. I drove my arms hard to keep my legs turning over. As the bend unwound I remained in the lead, wondering when people would start to come past me.

As I approached the home straight I felt great. My confidence grew with every stride I stayed in the lead. As we straightened up I stood tall, feeling strong and relaxed, striding out smoothly. Rather than tying up and dropping back, I stretched my lead, crossing the line in first place.

We didn’t talk much afterwards. The usual banter was missing as we all tried to recover. From my perspective not much needed to be said. In the great scheme of things the race didn’t matter, it was just a monthly test, one of many, but for me it was significant. The time wasn’t important either, it was all about how I felt, and I felt like I’d arrived, I felt great!

I think it felt significant because I had put myself in the position to succeed through hard work (training up to 5 days a week) and because I had taken a risk that had paid off. The fact that I had performed well while in the spotlight was a bonus!

It’s a feeling I remember to this day, and one that has rarely been repeated since.

As we get older, it gets increasingly easy to “cruise around the bend”, to take things a little bit too easy and fall into bad habits. Unfortunately there are few people that will take us to one side and have a quiet word, to instil confidence in us, to encourage us to push ourselves, to “kick into the bend”.

Last week Michael Jamieson, the Scottish Olympic Silver Medallist Swimmer, announced that he had to have his heart re-started to get it back into rhythm after a particularly hard training session.

“Not really sure the reasons behind it happening, but I went into an irregular beat after reaching 203 heart rate in a session (max is 193).”

Apparently he’s made a full recovery, and returned to training after just 48 hours.  Personally, I think it’s fantastic news that he is fit and well!

I don’t however believe that it’s “pretty cool” to push yourself so hard during a training session that your heart gets knocked out of sync.  Any suggestion that it’s a good thing has to be nuts!

The fact that the Specialist has only seen it three times would suggest to me that perhaps others may have experienced the same issue, but not been so lucky.  Not cool!

I guess I’m particularly sensitive to the story as I spend so much of my time trying to keep my Heart Rate within reasonable limits.  Personally, one of my biggest challenges is to make sure I spend enough time warming up and cooling down so I take care of my Heart.  Going “from rest to maximum effort as quickly as possible” definitely isn’t an option for me, and I would suggest shouldn’t feature in most people’s exercise regimes.

So, horses for courses… I’ll continue with the gentle build up to my Euro City Cycle.  I wish Michael all the best in his build up to next Summer’s Commonwealth Games!  For everyone else… go easy out there!

When I was in my youth I used to do athletics fairly seriously.  For a few years I trained up to 5 days a week, trying to build strength and speed to enable me to run faster and, in particular, jump further.

It was an exciting time for me.  I was blessed with the physical attributes to allow me to compete at the National level.  It helped me build self-confidence and it also taught me that the world (or the UK at least) isn’t that large a place.  Being the fastest runner in my school, or even my home town suddenly wasn’t such a big deal.  I was very lucky.

As I was growing throughout this period, my athletic development was also assisted by my physical development.  As a result, I was almost guaranteed to improve year on year.  If all other things had stayed equal I should improve over time because I was getting bigger and stronger.

If I had been competing continuously throughout the year it could have resulted in a slow, steady improvement requiring patience on my part.  As it was, the annual cycle of training and competition created natural breaks that generated the potential for “Step Changes” in performance.  A few months could make a big difference.

There were some key milestones during the year that were always eagerly anticipated.  They included:

Possibly the most notable, and least heralded milestone was the start of “Winter Training”.  This marked the end of the “rest” and the beginning of a long, cold and often miserable period of training that had the potential to make all the difference to performance levels for the following season.

Winter training was different from the summer.  It was much more focused on strength and endurance  rather than speed and technique.  “Favoured” sessions included Circuits, Weights, Hill Runs, Fartlek Runs, 300m Repetitions.   Most of this was designed hurt, and it was often  completed in cold, miserable weather adding an extra reason not to do it.

We worked in a tight group.  Pushing each other to dig deep and push harder.  You had to believe you would reap rewards for the effort you put in, but there was also the sadistic satisfaction of completing each session.

Today, for the first time in twenty years, I started a Winter Training campaign.  Having returned from work and changed into my cycling kit, I left the warmth of the house and braved the chill of the garage to get on my bike.

It was a low key event, but significant.  A strong winter’s exercise will play an important role in my on-going rehabilitation.  Given my general physical neglect over the past few years I have high hopes of significant improvements in strength and stamina.  I don’t have any real points of comparison against which to measure performance, however I have a clear goal… to cycle into Brussels on 11th May 2014.