Nephew #3 was the highlight of our New Year gathering… just two year’s old, he’s a cheeky chappie and full of life.

Constantly on the move, he alternates between bouncing and running, vigorously waving “Hello” and “Goodbye” at each end of his frequent journeys.

He’s at that wonderful stage where he wakes up every morning with no idea what is going to happen during the day but confident that whatever it is it’s going to be great!

He’s almost talking, but not quite.  He can communicate with sound but with few words.  He makes himself understood… mostly… he makes himself heard… always!

He’s a real star and more than happy to be the centre of attention, selecting different members of the family to accompany him as he goes about his business of the day.

New Year really wouldn’t have been the same without him around! 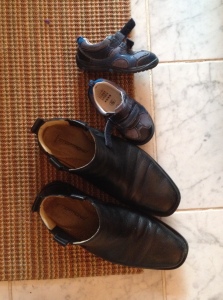 With the weather hampering plans to visit play parks, we decided to go swimming together – a favourite pastime of Nephew #3 and also a chance for me to get some proper exercise.

Abingdon Leisure Centre has a large Toddler’s swim area next to a wide, shallow main pool, all within one huge open area.  It was a bit different to the claustrophobic box (relatively) I normally swim in.  The width of the main pool accommodated 6 lanes with room left over for a recreational section next to the Toddler’s Pool.  Although there were a quite a few swimmers, there seemed to be ample space, it certainly didn’t feel crowded.

I was to arrive early, about 45 minutes before my Brother and Nephew, so I could have a “proper” swim first.  They were to join me for the fun bit at the end.

A simple plan.  What could possibly go wrong?

After 45 minutes I started looking out for them.  They hadn’t arrived yet, so I did a few more lengths.

“What could possibly go wrong?” I thought to myself again… this time actually looking for answers.

The lengths were becoming more challenging as I got increasingly tired.  The rest breaks became longer and more frequent… I was definitely now “waiting” rather than “swimming”.

It then struck me how difficult it is, as a middle-aged man in this day and age, to innocuously “hang around” a swimming pool…  I began to feel increasingly paranoid and self conscious.  Parents appeared to be getting uncomfortable too, at least one eye on me at all times.  I’m sure an extra Life Guard was drafted in specifically to watch me.

Having considered my options (at length by this stage), the only two viable alternatives appeared to be (1) to continue to swim, doing lengths for as long as I possibly could or (2) to leave the pool, get changed and start again when the rest of the party arrived.  I really couldn’t see anything good coming from waiting in the Changing Area, the Toilets, or in the Showers.

So more lengths it was.

Eventually, after 80 minutes, Brother & Nephew #3 arrived, chirpy and raring to go, without a care in the world.  After an indeterminable further wait they emerged from the Changing Area… I could feel everyone breathe a collective sigh of relief as I joined them.  The additional Life Guard returned to do whatever member of the Life Guard SAS do when they’re on a break… Threat Level Green.

After a few minutes of splashing, Nephew #3 started to cry.  Not being able to say exactly what was wrong some frantic pointing ensued.  It was not clear what the issue was.

I’m no expert, but I could sense he was not happy.  The crying continued…

Brother:  “He’s never usually like this.  He loves his swimming”

And so, after about 7 minutes of fun family swim time we called it a day.

Eventually a packet of Quavers managed to quell the flow of tears.  The trauma receded, finally being laid to rest by a pre-lunch nap… and Nephew #3 got over it eventually as well!

2 thoughts on “Hanging around the pool”