I suspect our Time Trial would have been a little more serious than this!

The official organised ride today was a “Time Trial”, an organised race along the sea front.  To the victor, a certificate and the honour of being the “Fastest cyclist to have turned up and competed in the Time Trial”, to the other participants, humiliation.

We all declined to participate.

This is probably the worst type of cycling for me.  At home my legs and my heart seem to be in an eternal episode of “The Weakest Link”.  In warmer climes my Heart Rate seems to be about 10 beats per minute higher.  As a result, I generally have some extra strength in my legs, but my Heart Rate is bouncing around at or above my limit.

Given my tendency to compete, I would have found it very difficult to stick to my Heart Rate limit in a competitive situation.  Not competing was the only safe option for me.

Fortunately, no-one else was particularly bothered about participating in this prestigious event either.

Instead, we headed up into the mountains for a leisurely climb, beverage and descent.  Approx. 26 km (with a climb of ~200m) in total, but done at a relatively sedate pace with frequent stops (mostly to get my Heart Rate under control!).

As is customary with these events, the conclusion of the outbound leg was marked with a refreshing beverage  🙂

A refreshing stop after a climb into the mountains!

For some reason, every time I come on an “activity” holiday I experience the need to remind myself that I’m not a sailor.  This holiday is no different. 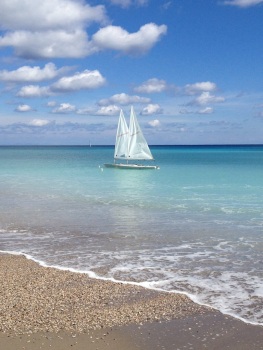 It was a beautiful, calm day. What could possibly go wrong?

Despite the fact that I wasn’t particularly comfortable that the temperature of the Mediterranean fell within “reasonable” limits, and that a sudden submersion may be “shocking” to the system, I had reluctantly agreed to have a sailing lesson with Daughter #2… it would be “a nice thing to do together”.

Our instructor was called Emily.  She appeared to have recently joined the Waterfront Crew and was learning the ropes, presumably to get some experience before doing a full season next year.

By the time we started to think about getting on the water the weather had become “blustery” (not sure if this is a nautical term, but it’s a more polite version of the thoughts that were going through my mind as we prepared to launch!).

The intention was to avoid shocks by staying upright and dry.  This wasn’t a sound plan!  Due to the waves hitting the shore, I was required to do a “fast launch” from the beach.  Daughter #2 would accompany Emily in another boat and we would practice our tacks and reaches.  It all sounded so simple in theory!

Emily:  “Sail towards the buoy and we’ll catch you up”
Me:  “OK.”
I headed off towards a buoy, and a bunch of other boats.
A few minutes passed…
No Emily.
Guy in Safety Boat:  “The start line is just over there.”
Me:  “Thanks, but I have no idea what you’re talking about.”
It turned out that there was also a race for the Sailors.  (Another race I’d decline to participate in).
Still no Emily.
I decided to tack to see if I could find Emily (& Daughter #2), resulting in…
Capsize #1.

As time passed the wind seemed to be getting more blustery.  The race started, but appeared to descend into chaos as boats capsized left, right and centre.

I learned that if you do a jibe, and you aren’t watching, you get hit on the head by the boom.  Hard!  (Fortunately I was wearing a helmet).  I wasn’t supposed to be doing a jibe.  I didn’t know I was doing a jibe.  I capsized again… and again!

I was not in control.  I am not a sailor.

Eventually Emily decided the wind was not appropriate for an introduction to sailing lesson.  She decided to drop Daughter #2 off on the beach and then return to assist me in getting to shore:

Emily:  “OK.  I’m going to drop Daughter #2 off.  I’ll be back.”
Me:  “OK.”
Emily:  “If you feel scared, I can go and get someone to sit in with you.”
I may have been completely out of my comfort zone, but I was not about to respond in the affirmative to this.  What was the worst thing that could happen?  I had already been beaten around the head, and de-boated on multiple occasions.  I was more than capable of sitting in a boat and waiting for a few minutes… wasn’t I?

When Emily did return, the master plan was for me to head towards the beach and shout to people to let them know that I didn’t know what I was doing.

Eventually I got the attention of one of the safety boats.  Purely the fact that I was upright meant that I was 3rd in line for assistance.

I didn’t need the safety boat.  My next capsize proved to be fatal.  We abandoned the boat and I joined Emily in hers for the final trip to shore, slightly battered and bruised but relieved, I have to say!.  That’s what you call quality family time!

It turned out to be a beautiful evening with a cracking moon!

Post Script:  Apparently my rudder wasn’t locking into place.  This would have created an obstacle to effective steering or control.  This sailing experience may not have been a complete success but perhaps all hope isn’t lost!