The hotel we’re in organises a number of bike rides of varying difficulties during the week.  Having bravely ventured out on my own yesterday, I decided to join todays “challenging” ride.  I had done it before… it was billed as being approximately 15 km, to “Epta Piges”.

Amusingly, there is another ride that I also did last week to the “Seven Springs”.  I’ve only just realised that they both mean the same thing!  Doh!

Our destination, although we had no intention of seeing any springs on this ride!

The ride took us up into the mountains, a route that I’ve now covered many times, before heading off up a very steep off-road climb.

This week’s participants appeared to all be fit males and were apparently keen cyclist – I’m not sure how much of a barometer it is, but I was the only person not to be wearing cycling gloves!

I had done the climb before an knew it was tough, so I mentally prepared myself to be satisfied with being “tail-end Charlie” as everyone else headed into the hills.  There was no way I could keep up and maintain a reasonable Heart Rate.

More cost effective than getting fit?

All was good.  We re-grouped twice as we completed the main ascent.  I had started to ride alongside another Paul, a Doctor from “Up North” (England), who had recently started doing triathlons.  He believed that when people turn 40 they either get a Sports Car, have an affair or get fit.  Originally he figured that getting fit was the cheapest option… hence the triathlons.  (He has subsequently started to re-assess as the cost of kit continues to escalate.  If you’re approaching this milestone and money is the only consideration, you might want to think seriously about a Sports Car!)

Having hit the top of the climb the terrain flattened off however the number of paths and potential routes increased dramatically.  I had done the ride once before, but I was following someone’s wheel.  This time there was no wheel to follow…

In fact, in almost no time, there weren’t any wheels, frames or any other parts of bicycles or cyclists in sight!  We were alone.

It was incumbent on me to remember the route.

To start with, I would describe us as “just off track”, as we followed a couple of tracks to dead ends before circling back on ourselves.

After some time we’d got ourselves lost good and proper!

We had decided to follow a maintenance access track for some electrical pylons… it seemed to be heading down, and generally in the right direction.  We followed it downwards, gaining speed and optimism as we descended.  Unfortunately it came to an abrupt end as the electrical cables spanned a ravine, connecting to a pylon on an adjacent hill some way away.

We weren’t quite as comfortable going off-road as this chap!

We were despondent.  We had been out for over 2 hours. The midday sun was beating down on us.  We were more off track than ever.  Water was running low.  It was almost lunchtime, and Paul had a Sailing lesson at two-thirty!!!

We did not have high hopes of being rescued by our cycling guide.  He’s not the most attentive at the best of times, and he loves a descent, so he probably wouldn’t have missed us until he’d been at the bottom of the hill, and waited for some time.  I’m sure he would have assumed (1) that I had been on the ride before and therefore was familiar with the route (2) that we’d intentionally decided to take a different route and (3) that our ride would include a trip to a bar for a drink.  As a result, I didn’t expect the alarm to be raised until darkness fell, perhaps a little sooner if our other halves noticed we were missing!

From time to time, I watch some random TV.  Just before I came away, I watched a programme featuring a number of different groups that had got lost in unfamiliar terrain: 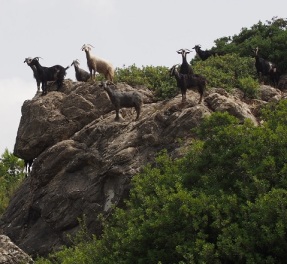 Our prospective dinner… catch me if you can!

I also have the tips and tricks gained from many episodes of “Born Survivor” to fall back on if necessary.  We had already spotted wild sage and thyme that might go well with one of the not so wild goats that we had seen further up the hillside.  We weren’t quite there yet, but it was reassuring to have this in-depth survival knowledge to rely on if things became that desperate.

Most of the “almost disaster” TV shows I’ve seen feature a couple of bad decisions.  Faced with the final Electricity Pylon, Paul made a good one.  We decided to turn around and head back the way we’d come.  It felt like the track back up would be long and tiring (and I was already getting weary), but it was a sensible call.  We’d avoid more dead-ends, reduce the chances of hurting ourselves, and, with a bit of luck, we might get back to being “just off track” again.

Having made it back up the track, we made our next good decision… we asked someone for directions.  To be fair to us, the “someone” (a goat herd who appeared to have made the ascent in a Fiat Punto) wasn’t there when we’d passed the same spot earlier (at least not obviously anyway), so it wasn’t like we’d ignored the earlier opportunity… but if he had have been we probably would have done!

All lonely European goat herds are not made the same!

It turned out that we had missed the start of our descent by about 30 metres.  It was hidden from view by an unassuming olive tree in the middle of a clearing.  We had cycled straight past and onto the maintenance track.  I vaguely remembered the clearing, but not the olive tree!

Our relief was palpable.

We descended and headed home, tired and grateful (and having covered over 25 km).

To be fair to the guide, he passed us in a car as we approached the resort.  Apparently they had waited for us for some time, shouting and whistling (Plan A).  He had headed back up to the top of the hill to try and find us (Plan B).  I’m not sure what his Plan C was, but I’m glad it wasn’t put into action… it could have been highly embarrassing all round.  At least this way no-one will hear about it!