Fortunately it wasn’t raining when we got up. Having had torrential rain for most of the night it was a relief to be able to get up and pack up before it started again.

The night had provided a few hours’ sleep.  A combination of the strange bedding, makeshift pillow and sounds of nature had interrupted what should have been a great sleep.  On the positive side, the sound of the rain had masked the sound of snoring being generated by my fellow campers. 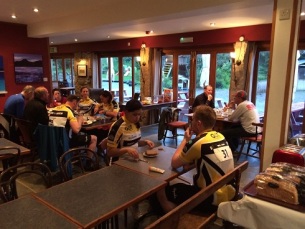 Breakfast day 2. The high spirits of Friday evening had been replaced by tiredness and nervous anticipation of what lies in store

As we made our way to breakfast, the exertions of the previous day were still fresh in our minds and our bodies.  It promised to be a slow start to the day.  The rain resumed as we prepared to leave.  It was an almost constant companion for the day.  Clothing was a tough selection; the weather was wet and warm.

Although on paper the route was easier than the previous day, it featured two challenging climbs; Cabrach and the Suie.  I was keen to operate well within myself during the morning session.  I wasn’t feeling particularly special, and I was keen to make sure I had some gas in the tank for the challenges of the afternoon. 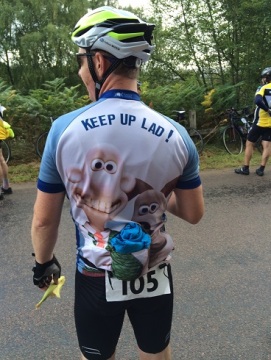 There were many forms of motivation along the way

The Cabrach however didn’t offer anywhere to hide. For me, it was a long, hard slog of almost an hour in total.  I just had to keep my head down and keep plodding away.  Fortunately motivation was high, partly generated by personal pride and partly by the presence of other participants.  Lunch was a welcome break! 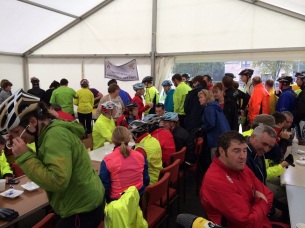 Lunch on day 2 was a slightly squelchy affair

The Suie was a different beast altogether.  There was a lot of hype about the climb; it is relatively short but the sharpest we would have to contend with.  I haven’t had to walk up a hill in a long time, but the thought certainly entered my mind as I trudged my way up.  The fatigue of the previous 140 miles certainly made itself known.

For me, one of the satisfying aspects of Ride the North is the fact that my heart health wasn’t really a factor.  Over the past year I’ve got myself fit enough that the cycling 170 miles over two days was well within my capability.  The only exception to this the ascent of the Suie; my heart rate monitor was certainly a factor during the climb.

During the ascent my heart rate got high enough for me to want to reduce it a little.  Walking was obviously an option, and one that my legs would have appreciated too, but it wasn’t what the ride was all about for me.  Instead I dropped in behind someone who seemed to be struggling more than I was, and kept tapping away on the pedals.  I was slowly able to bring my heart rate down. The climb was very slow, but I made it to the top.

With the Suie behind us, the sun came out (very briefly) and we made our way home.

I thought one of the remarkable aspects of the event was the general level of preparedness of the participants.  Although the field was made up of men and women of a wide range of ages and physiques, everyone seemed to be fit and thoroughly prepared.  It was an absolute pleasure to be part of such a strong, good natured field!

Particular thanks must go to the two ladies that towed us the last few miles home.  Having flirted with an over-taking move, we quietly tucked in behind and took their lead to the line.  After 12 hours in the saddle it was a relief to be able to sit in behind two such strong riders. 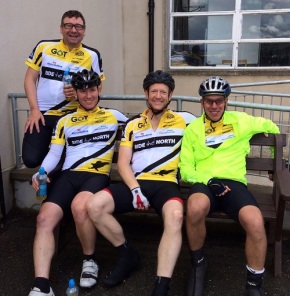 Before the final leg, and the final downpour… almost there!

The wet weather on day 2 meant my phone stayed safely in its waterproof bag for most of the day.  The good news is that it still works but unfortunately I hardly took any photos!