I arrived in Inverness with a distinct sense of anticipation, the excitement was palpable, Ride the North weekend has finally arrived (and as an added bonus, it’s not even the weekend yet!).

The train from Aberdeen was filled with people rather like us; small groups of slightly dishevelled looking middle aged men (mostly).  We were the latest in a steady stream of people to make this pilgrimage.

Having placed our precious bikes into the care of the Ride the North support team, we travelled north independently.  All being well, we will be re-united tomorrow morning to start our journey back home, but for the time being each of us will carry a feint sensation that something’s missing.

Not everyone has travelled to Inverness by the same mode of transport.  A hardy few had cycled up from Aberdeen, a 120 mile prologue to the main event.  I have to admit to a slight tinge of envy.

For some people, myself included, Ride the North represents a major challenge.  We will push ourselves to new levels of endeavour.  How I’d love to be able to do a hard days cycling in advance to prepare myself for the nice sociable cycle ahead.  Next year perhaps?!

I suspect it’s going to be a couple days of extremes: 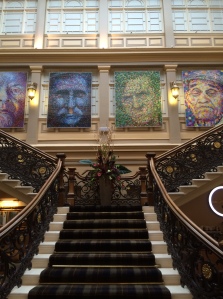 The grandeur of the Royal Highland Hotel, Inverness

As subsequent waves of people arrived in Inverness this evening, the city continued to fill with anticipation.  The pubs are resonating to the stories of hills conquered, and those that lie ahead.

In a lot of ways, the extremes will make the event; I just hope everyone ends up in one piece and with a smile on their faces!  Good Luck!

2 thoughts on “Ride the North: The Prologue”