Endurance events look easy when you watch them on from the comfort of your Living Room.  We get used to watching professional athletes performing amazing feats, it becomes the norm.  We tend to overlook the hours of training that go into the preparation and the effort of the event itself.  They make it all look too easy.

Last weekend I watched my first “real” triathlon.  It was a bit different to watching the Brownlee brothers!  It looked much more like the kind of activity I might be able to participate in!

Historically there were lots of reasons why doing a triathlon was a crazy idea, not least the fact that I was a physical wreck.  Having got myself into some sort of shape it seems a lot less crazy now, and given my exercise regime includes both swimming and cycling, I’m almost there as far as the training is concerned.  My most compelling arguments for not doing one would largely come down to my ignorance, so I decided to educate myself. 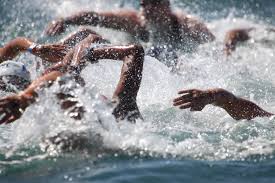 It all looks a bit brutal to me!

The swim held the biggest fear for me (and still does to be honest).  I have never been much of a swimmer.  When I’m in the pool, much of my effort is invested in the avoidance of drowning; little energy is left over for propulsion.  The thought of having to battle with hundreds of other participants for space was a scary one (although this was perhaps naïve, and based on watching too many open water events on TV).

As it turned out, it all seemed rather civilised, down to the staggered start, the coloured hats (to tell the athletes apart), and the polite overtaking (requested by a tap on the foot and offered willingly). I found the range of swimming strokes, techniques and speeds reassuring too. You don’t have to be an ex-Olympian to participate (although I’m sure it would help if you were!).

I was particularly heartened by the over-exuberance of some of the participants that resulted in them going out a bit too quickly on the swim. Some were even kind enough to give us a running commentary on their level of fatigue at the end of each length as they struggled to catch their breath and summon the energy for the next 25 metres. I’m sure some people were caught out by false confidence gained from watching too much TV! 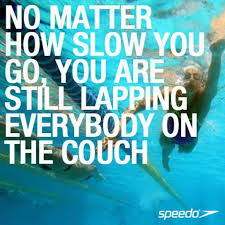 Having selected a triathlon as the target “goal” for this winter’s training, I plan to balance armchair reconnaissance with some solid physical effort, building on the base I’ve built over the past year or so.

With just 10 days to go until the final big event of the summer, Ride the North, it’s exciting to look to the future again and identify some challenging goals. However, first things first…