Don’t tell anyone, but yesterday I went on a Water Slide. Given my Heart “Condition” it was an illegal act, but one that was considered at length (well, considered at least) before I took the plunge.

I’m not sure exactly where the perceived risks lay; it certainly wasn’t too frightening nor particularly exhilarating, it didn’t require significant physical exertion, and it didn’t expose me to dramatic changes in my environment. Still, it was forbidden and I did it, and it felt good (apart from slightly battered elbows). 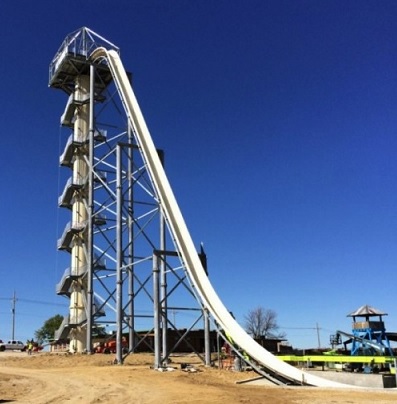 If the exhilaration doesn’t get you, the climb might!

Following the Heart Attack, it took me a while to get comfortable re-exposing myself to life’s risks. What I’ve discovered is that they generally fall into one of two categories:

I’ve come to believe that the second category is most dangerous. It takes no effort, no thought but is guaranteed if you’re on that path.

Of course, there’s a third category… the risk of doing nothing; opting out, becoming irrelevant, out of touch. Becoming so cautious that life loses excitement, hope.

For many years, I was in steady decline, arrested only by the Heart Attack. It kicked my behind and prompted me into action.

Now I’m back on the right course, I’m not going to throw it away by taking silly risks, but at the same time I’m going to live my life. I will think about what I’m doing, weigh up the risks, and from time to time live life on the edge! 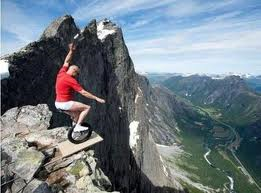 OK, so I won’t be doing that any time soon!

9 thoughts on “Living life on the edge”