I finally managed to get outside on the bike on Sunday.  I took the Mountain Bike out for a spin on an old railway line in Aberdeen.  Nice, safe route without too many (any) hills, that didn’t require any real bike handling skills.

It was another beautiful morning, the final death throes of summer.  A great day to get out and get some air into your lungs.  Unfortunately it was a bit too nice (or more accurately, I took too long getting ready and was a bit late), as there were lots of people on the railway line.  A lovely scenic place to park your car, take a walk, grab an ice-cream or a play on the swings and slides, before heading back.  As a result, it was busy. 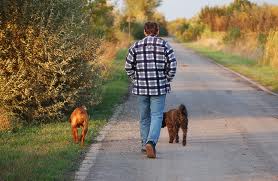 Hazard… between or around?

I was keen not to end up in a ditch, or to collide with anyone’s favourite child or youngest Chihuahua.  I therefore had to stay very alert, particularly given how difficult it is to see whether a dog / child is on a lead from a distance… plenty of scope for unfortunate incidents!

I was not alone.  There were plenty of other people on bikes (cyclists, I guess you’d call them) making use of the track, as well as runners, zimmer frame operators, wheelchair passengers, etc.  Pretty much any moveable obstruction you can imagine.  There was potential for carnage… ironically, every kind of accident other than the proverbial “train crash”. 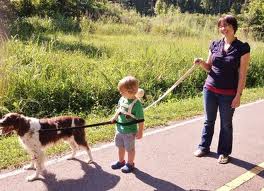 Who is controlling who? A cyclist’s nightmare!

The casual strollers didn’t seem particularly happy with the cyclists… at least, some of them didn’t seem very happy with me:  “Bloody cyclists!”, I could hear them muttering not so quietly as I whizzed past… but I was off!  Gone.  Somewhere else to be…  until I passed them again on my return that is, when we greeted each other with pleasant smiles and a fleeting nod!

Someone’s going to get hurt!

The ride itself was fine.  I did just under 20km and rode for just over 50 minutes.  A casual Sunday morning cycle.  I was tempted just to keep going, enjoying the freedom, but I know I need to take it easy.  “Don’t do more than you could on your worst day” (Cardiac Rehab Motto).  A bit depressing really as I’ve always thought the best days were the most important.  Still, I don’t want to set myself back, so moderation rules.  Yeah!

3 thoughts on “Getting outside”