Today I had an opportunity to “Ride like a Pro”, a cycling event sponsored by Jaguar UK and Team Sky. I was one of about 40 fellow MAMILs that assembled at our local Jaguar Garage. To be honest it was an intimidating group. As everyone casually milled around waiting for the “Grand Depart” you could tell they were sizing each other up and assessing each other’s equipment. It was all very light-hearted as we finally set off, formed a peloton and headed into the countryside. 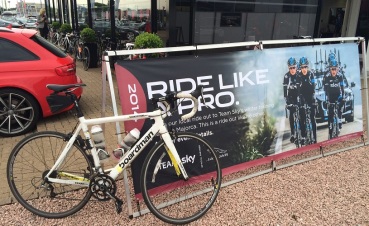 Initially we all stayed together. It was great to cycle as part of a large group; it’s something I don’t get the chance to do very often. I managed to stay in the pack for the first 18 miles or so. I had to work hard to keep up as we were occasionally strung out, negotiating roundabouts and other traffic furniture, but I stayed in the group.

However, it all changed rather quickly when we hit the start of the first climb of the day…

Although I hadn’t cycled it before I was very familiar with the road we were on; it forms part of one of my regular routes but I have always ridden it in the opposite direction. As a result, I knew the hill was the first of several climbs that would come in quick succession. From the other direction it’s a fantastic descent (in fact, it’s the one that featured in my Foul Mouthed Cyclist post) but I knew that any attempts to keep up would be short-lived, and could potentially wipe me out for the rest of the day.

It appeared that many of the other members of the peloton had been cycling well within themselves. They were being polite, cycling in formation, biding their time. The first stiff hill was what they’d been waiting for! I drifted back through the pack very quickly; officially dropped!

I wasn’t the only one. Four or five of us negotiated the hills independently; oblivious to what was occurring ahead or behind. It was a bit of a reality check for me. 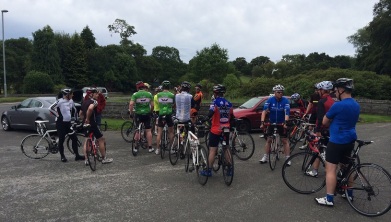 A drinks stop provided a bit of respite and allowed us to momentarily re-form a group (technically “re-join” as I think most people had managed to stay together). It was a brief moment. The gloves were off. At the first opportunity, the group took off again. I had managed to keep up for a few miles. Many hadn’t.

I found myself on the road alone. There were people up ahead and people behind, but I didn’t see another cyclist for over 10 miles. To be honest, I thought I’d taken the wrong route but I was on a familiar road with a fair wind behind me so I just kept plugging away.

An impromptu stop about 10 miles from home saw the whole thing repeat itself. However, it did confirm (1) that I was on the right route and (2) that I would pass my house to complete the ride before turning around and heading home again (while cycling along on my own, thinking I had taken a wrong turn the thought of heading directly home had briefly entered my mind).

We didn’t see much of the Team Sky support car during the ride. It led us out of the garage and for the first mile or so, but having let us pass so it could bring up the rear it must have dropped a long way behind to deal with some stragglers or mechanical issues.

Apparently it then had to set off in search of a couple of riders that had taken a wrong turning, last seen heading in the wrong direction, into deepest, darkest Aberdeenshire. I would have loved to have been able to raise my hand and be “attended to” but I guess it’ll have to wait for another time.

Overall, the ride was a different level of intensity than I’ve been used to. I was very tired when I got home, but I’m sure it’ll do me a lot of good.  It was the type of experience that I wouldn’t want to repeat tomorrow, but next week would be just fine.

Despite today’s reality check, I’m keen to keep building on the foundation I’ve established. I have to remind myself that it was just under a year ago that I did my first post-Heart Attack ride: On 18th August 2013 I managed to cycle 20km in 50 minutes along the railway line from Duthie Park to Milltimber and back.  Perhaps in a couple of years I’ll be able to put the pressure on when we hit a hill!